As he stood before the Grand Canyon, he was told by one of the guides that he was facing two billion years of rock. “Two billion years and one minute”, he said. The guide looked perplexed. “That one minute just included us standing right before the canyon”, he explained. But a voice older than the canyon seemed to reach him, saying: “You are not recalling another minute before the canyon was formed”. He remembered then he was more ancient than the Grand Canyon.

Within a split second or even less he was standing before the house of Porphyry in distant Sicily. It was late afternoon in one of the last years of the third century. As he approached the house, he could see Marcella, Porphyry’s wife, sitting in one of the windows looking towards the small pathway he was climbing to reach the house. She waved her hand. It looked like a white bird rising a little from the branch of a tree and settling down again. She opened the door, and with her usual calm led him into the house. She was holding a file of papers. As she sat down, she said, “Porphyry is in Rome one some business. He will be back within a couple of weeks. This is his letter. I think I should share it with you.” She handed over the letter to him. He started reading while she got up to prepare something for him to eat.

As he started reading the letter, he knew with tears in his heart that though there were several knowers, knowledge was one: “If we were just a body, one in Sicily and another in Rome, you are far away from me, and I very much yearn to return as soon as possible. But I know, as you also know, that we are more than a body, and therefore I am with you and you are with me”.

Marcella sat down after passing on to him a plate with some bread and cheese. “Are you alright?” she asked. He looked at her wondering how much she was aware of his distress, of his wanderings, of his sorrow. “I should tell you something, my friend”, she spoke with affection, “you will be on this earth again a few hundred years hence, and after many years of quest you will fall in love with the teaching of Porphyry’s Master”. He waited. She continued: “Philosophy and Prophecy will unite once again. But you must not waste that opportunity.”

She appeared then as the High Priestess of the second card of Tarot. “Do not concern yourself with how I appear to you,” she had already read his mind, “Let me tell you that you appear sometimes as the Magician, the Hanged Man, and the Fool all at once.” He could not control his tears. She took his hands and held them gently and her eyes were on the ground. A strange light shone on her face. The sun was setting on the sea. A cool breeze was blowing.

He asked, “What will be that time upon the earth?” She did not reply. 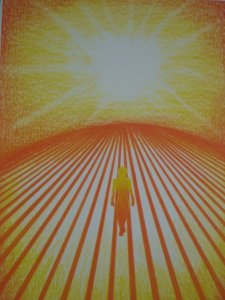 2 thoughts on “The Grand Canyon”